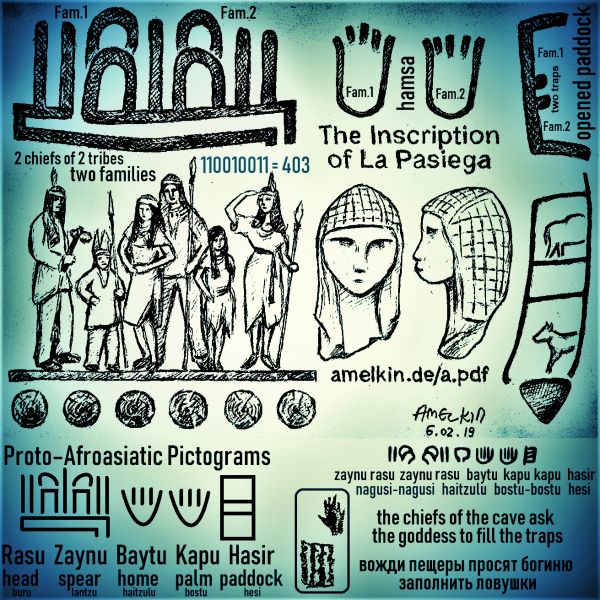 The archaic cultures of the ancient Near East and Franco-Cantabria since the first migrations of Homo sapiens from the West Africa and the West Asia to Europe were probably based on the Proto-Afroasiatic Language and Pictograms, as well as on some Neanderthal dialects. Thereafter here is my very new hypothesis on the Inscription of La Pasiega (Spain). Now it concerns the Proto-Afroasiatic Pictograms. I have assumed that they are similar to the Proto-Sinaitic Script. Afroasiatic is the oldest established language family in the world. I am trying now to study the culture and petroglyphs of the ancient Africa and to establish a connection between the Proto-Afroasiatic Pictograms from one hand and the symbols of the Proto-Basques or Pre-Proto-Basques from the other hand, who migrated from the East Africa through the Western Asia to Franco-Cantabria. The Proto-Afroasiatic Language is believed to come from the Upper Nile Valley (the center of the Halfan culture) to the Iberian Peninsula (the Proto-Iberian, Proto-Aquitanian (Pre-Proto-Basque) and Proto-Cantabrian cultures) c. 22.5-22.0 ka cal BP or even earlier (Wikipedia). Therefore a new version of the decryption (decipherment) of the Inscription of La Pasiega using the Proto-Afroasiatic Pictograms is proposed as follows: "we (2 families of the inhabitants of the cave) are asking the deities to protect our home and to bring us good luck in hunting" or "we, namely two families (two chiefs of two tribes), ask separately our Goddess for help in filling our two traps with animals". An attempt to read the "Inscription of La Pasiega" using directly the Proto-Sinaitic Script leads to the following (taking into account that doubling of ideogram or logogram means plural): "zaynu/rasu zaynu/rasu baytu kapu kapu hasir" (in Proto-Sinaitic) or "the chiefs of the cave ask the goddess to fill the traps" (in English) or "вожди пещеры просят богиню заполнить ловушки" (in Russian) or "nagusi-nagusi haitzulu bostu-bostu hesi" (in Pre-Proto-Basque). I guess, that the Inscription of La Pasiega was made appr. 20,000 - 15,000 years ago by the Pre-Proto-Basques using the symbols similar to the Proto-Afroasiatic Pictograms. I think, that the Pre-Proto-Basques had some connections with the Near East at that time or even earlier.